"WHENEVER THEOLOGY TOUCHES SCIENCE,  IT GETS BURNED."
(BELOW)

The Sense of the Sacred and the Motions of Grace" 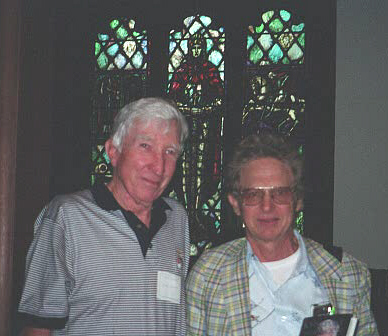 I started my conversation with Pulitzer Prize-winning author, John Updike, by telling him I had learned from the book that he had been Congregational. I showed him a picture I had taken of the Congregational Church in Ipswich, MA in 1959. He recognized it and confirmed that it had been one of the few "wooden gothic" churches in the world before it had been struck by lightning in 1965. John said that it might have been saved if the firemen had been more ambitious, but that the fire got between the double walls of the church and had burned to the ground. He said that the end of his book "COUPLES" has a burning church. John Updike has written over forty books, in which religion, art, and sex are the "three great secret things."

Ipswich Congregational Church, 1959, before it burned to the ground.

John remembered Rev. Dawes sermons, whose name was on the sign in front of the church. He also remembered my father, Rev. Auburn Carr, who was the pastor of the Methodist Church across the street. John had been a member of the building committee that built the stone church presently standing on the site.

I then asked him what he meant by the following statement:

"THE MODERN CHRISTIAN INHERITS AN INTELLECTUAL TRADITION OF FAULTY COSMOLOGY AND SHREWD PSYCHOLOGY."

This was taken from his "Remarks upon Receiving the Campion Medal" which was bestowed upon him by the Catholic Book Club in New York City on 11 September 1997. It came from the lead essay in "John Updike and Religion," edited by James Yerkes.

John said that the "faulty cosmology" was a literal interpretation of the first chapters of Genesis (a la Creationists.) The "shrewd psychology" was that St. Paul and St. Augustine had "got it right." The Christian existentialist, Kierkegaard, has expressed this more recently as "Man is in a state of fear and trembling, separated from God, twisted by the conflicting demands of his animal biology and human intelligence, of the social contract and the inner imperatives."

I told John that my philosophy course at University of Massachusetts Lowell, "Science and Religion: Cosmos to Consciousness," attempts to reconcile Genesis and modern "Big Bang" cosmology. John felt that "Big Bang" cosmology is closer to Genesis than the former "continuous creation," because the "Big Bang" has a beginning. I told him that as a scientist, I cannot take Genesis literally, but look at it as expressing poetic and literary truth. Genesis deals with our relationship to God as we are "created in his image." Science does not deal with this issue. John asked me how my students reacted to this. I told him that most of them were brought up Roman Catholic, but are presently non-church-attenders, agnostics, or atheists. We have good discussions and they are open to my viewpoints.

"Whenever theology touches science, it gets burned. In the sixteenth century astronomy, in the seventeenth microbiology, in the eighteenth geology and paleontology, and the nineteenth Darwin's biology, all grotesquely extended the world-frame and sent churchmen scurrying for cover in ever smaller, more shadowy nooks, little gloomy ambiguous caves in the psyche, where even new neurobiology is cruelly harrying them, goughing them out of the multifolded brain like wood lice from under the lumber pile."
-From John Updike's  "Roger's Version" (New York, Knopf, 1986).  This was quoted on pg. 163 of  "Religion, Science, and Naturalism" by William B. Drees (1996)

When I saw John Updike in the used book section of the St. John's Episcopal Church Fair, Beverly Farms, MA  on 14 July 2001, I showed him this passage. John was pleased that his work was being quoted. He said that he had enjoyed writing "Roger's Version," where he dealt with such issues as the "Big Bang."  He said that now the expansion of the universe is accelerating.

I pointed out to him that in books like Why God Won't Go Away by Newberg and D'Aquili, and in the May 7, 2001 cover article of NEWSWEEK God and the Brain: How We're Wired for Spirituality, science is validating the religious experience. Plots of brain activity during meditation, in which monks experiences being "one with the universe," show the part of the brain that orients us with respect to the world.
inactive.

John Updike's response was: "Well, it does not prove that God exists!"